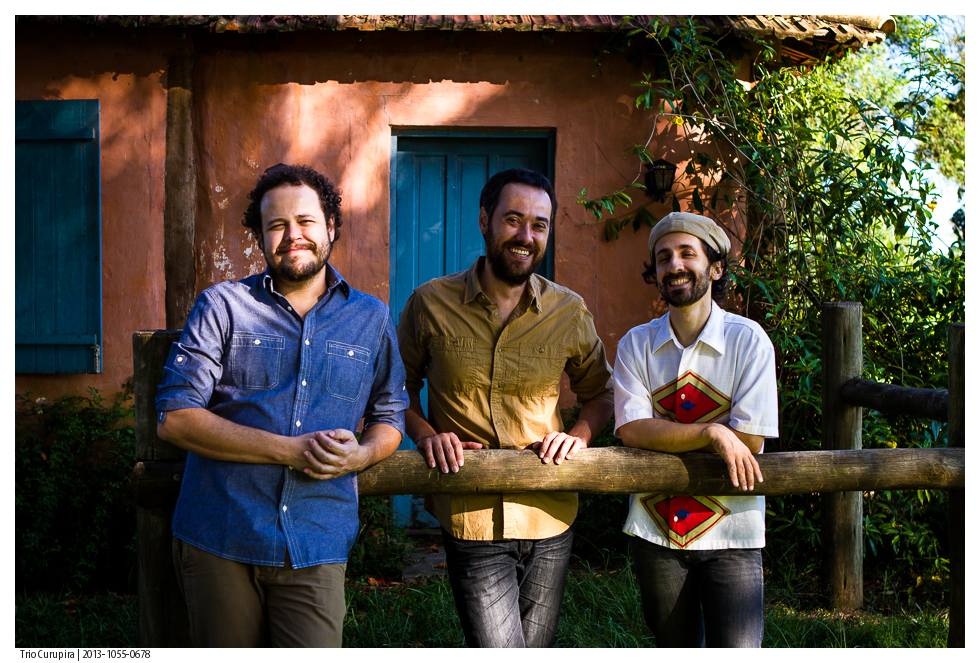 Trio Curupira is formed by musicians and composers from São
Paulo - André Marques, Cleber Almeida and Fábio Gouvêa - who come
exhibiting for audiences in Brazil and abroad one of the most creative
of the Brazilian Jazz genre. Featured in Rock In Rio - Lisboa / 2004, the
group was still one of the finalists in the "Prêmio Visa Instrumental" in the same
year. In addition, his CD "Pés no Brasil, Cabeça no Mundo" was
the 2008 Latin Grammy and the Brazilian Music Award in 2009.
The Curupira was born, in mid-1996, a happy meeting of ideals and
affinities of its members. Determined to develop a job
of musical and cultural research, based on the
genuine Brazilian music, they go through all the rhythms and eliminate
any border between styles. The sound is dense, the harmony is rich and the
personality is remarkable. The name was chosen because it refers to the
mythical character of Brazilian folklore charged with protecting
forests and animals. The trio took on a similar mission:
music and Brazilian culture. "We start with a totally
centered on Brazilian music, but we realize that we are against
musical prejudices. We play rhythms from all over Brazil, but we are
open to influences; be it classical music, jazz, Arabic music or
of flamenco. Music is music, "says André Marques.
For the members of the Trio Curupira, the great cultural miscegenation
in Brazil allows the mixing of several
such as indigenous, African, European and Arab, among others.
"Few had any interest in exploring this subject, embedded in all
segments of our culture. We want to bring the audience - through sounds
of our inherited cultural plurality - an
original, that only Brazil owns. "The bassist Ricardo Zohyo, who
participated in the foundation of the trio left the group at the end of 2002. Although their
has contributed to delay the recording of the second album, the
guitarist and bassist Fábio Gouvêa did not change the essence of the
group.
In March 2008, the trio toured all over Argentina to launch the
his third CD also edited there, on the label MDR Records, the CD "Feet
in Brazil, Head in the World ", with great publicity of the local press and
critical acclaim. This CD is a work distinguished by having only
songs of other Brazilian composers, while the two works
previous ones had most of the songs composed by the trio.
In 2013, Curupira released its fourth CD, "Janela", whose recording was
sponsored by PROAC and toured throughout the State of São Paulo.
Also in that same year the trio made its first presentation in the USA,
in the legendary 55 bar in New York.
In 2016, it released its fifth CD, celebrating its 20 years of existence. The
CD features the participation of big names in Brazilian music as
Hermeto Pascoal, Hamílton of Holland, Raul de Souza, Jane Duboc,
Arismar do Espírito Santo, among others.
Another great characteristic of Curupira is the enormous variety of stamps
used, both in the shows and in the recordings, due to the great exchange of
instruments made by them. In their presentations both the
traditional trio formation (piano, bass and drums), like others using
flutes, cavaquinho, guitar, percussion, escaleta, viola caipira, rabeca,
among other instruments.
PRESENTATIONS OF CURUPIRA HAVE ALREADY HAD GREAT PARTICIPATIONS
NAMES OF MUSIC HOW: HERMETO PASCOAL, JANE DUBOC, HAMÍLTON DE
HOLANDA, ARISMAR DO ESPÍRITO SANTO, NATAN MARQUES, VINÍCIUS DORIN,
ITIBERÊ ZWARG, ARRIGO BARNABÉ, BADI ASSAD, RAUL DE SOUZA, GABRIEL
GROSSI, IZABEL PADOVANI, DUOFEL, MESTRE SALUSTIANO, AMONG OTHERS.