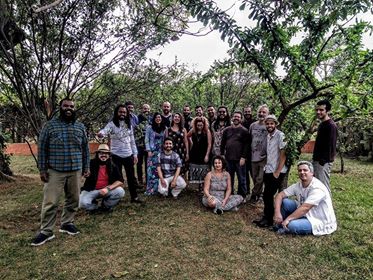 The Brazilian music orchestra "Vintena Brasileira" was born in 2003, when André Marques had the idea of ​​creating a workshop of Brazilian rhythms with musicians graduated by the "Conservatório Musical de Tatuí" (SP).

This group strengthened and today, in its formation, has 21 members from different cities, who intend to bring the best of Brazilian instrumental music to the public, through the vast knowledge of André and the exceptional talent of his musicians.

The orchestra is adept of the "Música Universal", within the musical concept of Hermeto Pascoal. The term "Música Universal" was created by Hermeto to designate his music, in which all possible elements are mixed in a single musical genre, without labels, without preconceptions, with a natural mixture, through the knowledge of various rhythms and languages .

From the folklore to the erudite, to jazz improvisations, to Brazilian rhythms and to melodies of different influences, such as Arabic, Indian, Flamenco, André Marques composes and makes arrangements with new fusions and sonorities for the orchestra. The formation of Vintena Brasileira is very different from traditional orchestras, it has violins, cellos and flutes, but also electric guitars, mandolin, viola caipira, percussion, among others.

Vintena already has 4 CDs released. The first, "De Baque à Avessas", launched in 2008, was carried out with the funding of the Law of Incentive to Culture (Linc) of the city of Sorocaba. "Labirinto" is the name of the second CD, made possible through the announcement of FUNARTE / 2010. The third was an homage to the great singer and composer Milton Nascimento. "Bituca" was recorded in 2013 and released in 2015. On this CD, Milton himself wrote a letter in hand, supporting and praising this project. In addition, he said in an interview with Cruzeiro de Sul newspaper, Sorocaba: "I consider André Marques a genius. This work he is developing is one of the most beautiful things they have done from my work. It was one of the greatest gifts I've ever had. "

In its time of existence, Vintena Brasileira counts on important participations in festivals and was contemplated with sponsorship of Petrobrás and the companies Cacau Show and Astra through the Program of Cultural Action of (PROAC) of the "Secretaria da Cultura do Estado de São Paulo". Through these sponsors two tours in the interior of São Paulo were completed, the first in April 2006 and the other in the second half of 2010.

In April 2010, in São Paulo, Vintena had a very special presentation alongside Hermeto Pascoal. On that occasion, André Marques made three arrangements of Hermeto's tunes, among which "Haja Coração" was highlighted, a theme that was much commented after the show, making it inevitably added to the repertoire of the group. Hermeto was thrilled that day and after listening to Vintena playing six songs, she entered the stage and praised the performance of the group.

Check it out now: http://www.youtube.com/watch?v=DmQ9oYCmPCM

In January of 2012 had another special participation in his show, that of the consecrated Brazilian bandolinist Hamílton de Holanda.

In 2015, the release of the CD "Bituca" featured the participation of Mônica Salmaso and Sérgio Santos.

In 2017, Vintena was contemplated by the PROAC announcement, through which it recorded its 4th CD - (r)existir.

After 15 years of existence and often almost extinct, the group still survives and resists without any kind of patronage. Because he has many members and no support, he always faces difficulties to move, to play his music and even to find places for rehearsals. For all that came the idea of ​​this title, with the union of words "existir" (exist) and "resistir" (resist).

Vintena, after all this time, is still alive and with the same desire for its beginning, which is to bring Brazilian music to all audiences, a song that unfortunately, due to the mass media, the people do not know.

The group consists of: